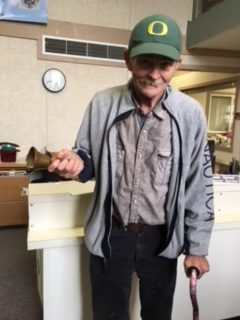 He wrote up this story to accompany his donation:

“The History of the Fruitvale school bell as I know it. History is just the stories of people going about their daily lives. These stories are about some of those people: LaVern, William, Alice Stephenson. They among many others including Wade Osburn’s girls were called to class with that bell. One story concerns Uncle Bill.  First graders were asked how many fingers they had, Billy’s reply, “Seven fingers, two thumbs, and a stub. Uncle Steve (LaVern) cut it off with an ax accident.

Uncle Steve worked as a sailor on the lumber schooners out of Newport and was a guard at Hanford during WWII. Worked as a boiler tender for many years at Hanford. Retired to Ocean Park, Wi.

Uncle Bill worked as a mechanic for years for Davidson Bakery. Then moved to Taft and operated Taft Texaco service station.

Aunt Alice married Lloyd Gilchrist, bought a home in 1940 on N. Hurst where she lived all of her days.

All these people’s lives and many others were touched by that bell. Mine included.

When the smaller school districts in Oregon consolidated, Fruitvale school was no longer, as many one and two-room schools were also. Wade Osborn acquired the bell. When Wade passed away my Grandmother acquired it. She passed away in 1957. Aunt Melba (youngest daughter) acquired it. Cynthia James (Melba’s youngest) has it now. September 15, 2017, got it from Cynthia.” Donated to Lincoln County School District in October 2017.

Rockne Stephenson whose Aunts and Uncles attended 1927 or earlier.